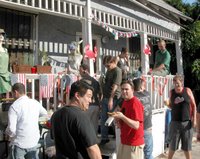 I didn't get to the bbq until 5.30 and found most of my friends already drunk.

This is not surprising. 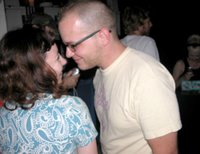 The big secret of the day was Danny was going to get an additional surprise for his birthday, but the fancy camera they bought hadn't shown up yet unfortunately. He did have a nice hand drawn illustration of the camera in the box though. Actually it might have been a pasted on b/w picture of the camera.

I don't know. I make half this stuff up.

So after pissing off one person and finishing my stash of stellas we walked down to the Echo Park Lake. I highly encourage rolling down lawns drunk. After an hour or so I decided to take a little walkabout and apparently thought audioblogging would be a good idea. Coming back I bumped into a friend and we walked back hand in hand to the party. This is surprising because people are germ ridden and I don't like touching them. eww. 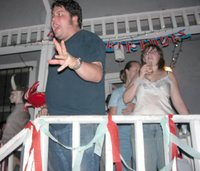 Eventually we ran out of beer and Joe made a proclamation for the need to create a beer run fund.

I instead had a shot of tequila and a kiss as a chaser.
Echo Park