This whole company gets so lazy here on Fridays and I'm not immune to it. Spent the whole day creating playlists in iTunes, scouring the mp3 blogs, doing nothing. One Friday we did shots of vodka which took a little more effort than just laziness.

Paydays are the worst of the worst work ways (said Elmer) since my company doesn't offer direct deposit. After coming down from wired from coffee morning productive, I'll go to lunch, come back for a couple hours, and when the paycheck is hand delivered to me, off to the bank on the company's dime.

I think why my company isn't able to offer direct deposit has something to do with the owner being an idiot and laundering money for the Los Angeles arm of the Irish mob in-between the sister companies and partnerships, but don't quote me on that.

Until a couple weeks ago I actually stood in line OG style with heavy sighs, crossed arms, doing a crippled co-worker a favor. This one teller, a tad young for my taste, flirts with me which I find flattering (because people don't flirt with me)and slight amusing. When I'm drunk I've jokingly said that I'd do a 19 yr old, but I wouldn't dare date one (I was drunk, not serious), but this teller is a guy which is a far bigger issue keeping us apart than his age.

Since I grew up insulated in the liberal Bay Area, surrounded by many openly gay kids in a high school where the ridicule and insults were hurled at our horrible football team [if you're a HS football nut, we were 5 miles from the uber great De La Salle], people assumed their gaydar was functioning properly when it came to me. Didn't help back then that my best friend since 7th grade had to be the most openly gay, flaming (if you like un-PC stereotypes) kid you could've met. Throw in a long time girlfriend that went to a different school and you could imagine the confusion when anyone cared enough to ask. I'm thankful for growing up the way I did.

Once I was getting to know this girl Gaby at the local coffee shop where us "mods" hung out at all the time, you know, when we weren't smoking out to Bauhaus or something. She was asking around, I later learned, and received unsure, conflicting backgrounds on me. She wanted to know, so she asked me straight up.

Her: Can I ask you something personal?
Me: Sure
Her: Are you gay?
Me: Sorry to disappoint you, but I'm not.
Her: Oh I'm not disappointed.

Then we made out.

Strange thing is having nearly the exact same conversation a couple times later with different girls, that a girl let me touch her, and this post was originally going to finish with a sarcastic remark about using Ebay for shoe shopping. 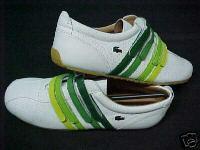