I was alone - my roommate was gone (or so I thought) - so I wasn't making an effort to be quiet. Like most moments alone I started commenting on the tasks at hand.

I should put in more pepper.
And a little of this too.
This is going to be super D duper yummy

I'm having fun bouncing around, with pots a banging, dishes settle on grease splattered counters, singing that Nair/The Clapper mash up jingle found only in my head: 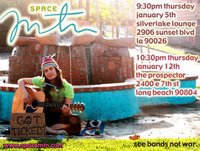 Tonight, even though I'm so frigging tired from less than four hours of sleep, I'm making it out to the LBC for this great line up (anyone coming with me?) .

Jessica Dobson always puts a smile on my face when I see her play with hopefully her band backing her up tonight (might be solo). Amazing artist on Atlantic, who will someday put out her album out this year.

Also been reading up on the headlining band Space Mtn, learning tidbits like that Dina Waxman played bass on the last Lemonheads album.

Space Mtn tracks can be had at this 3 hive.com post.

**Yes I know the lyrics are wrong