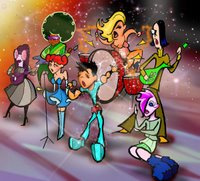 So this Sunday you'll might be sitting on your couch flipping through the channels in search of intellectual stimulation from Fear Factor repeats (or the Mexican rip off "Gana la Verde" or "Win the Green." and the green is a Green Card).

All of a sudden you'll sit up, spilling your Diet Pepsi, arms reaching out to nothing in particular with thoughts of low budget music video shoots in a hard to get to bars in Thai Town with fluorescent wigs and at least one drag queen.

But where will you go to get such a fix?
Well you're in luck! (cue game show music)

This Sunday at The Stone (citysearch profile) 5221 Hollywood Blvd. 90027 Sounds of Asteroth will be shooting the second portion of their video for Fluorescent Lighting. 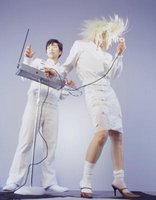 The only time I've been there to The Stone Bar was to see Seksu Roba, My Barbarian, with Ariel Pink opening up back in late 2003.

Besides a serious lack of parking in that area, I just remember Cortney exclaiming "When the fuck is this guy (Ariel Pink) going to get off the stage?" to a bartender who understood the universal language of "Oh my God this guy sucks" better than English. This was before he (Ariel Pink, not the bartender) put a band together (which I heard still sucked) and was simply singing over a boom box, with his shaggy hair covering his face, looking up long enough to drink his Heinekens.

It looked as hard for him to be up there as it was for us to watch. Weird thing is that when I heard his recorded material it wasn't all that bad.

[This might actually be real boring come to think of it, but the bar itself is pretty cool inside]