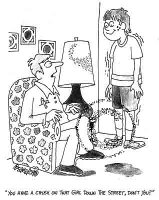 Back in the early 90s, I had this major crush on a fellow co-worker. I was 20 and she was about 23 having moved to the Bay Area recently from Boston.

So we flirted for weeks and slowly became friends while working shifts together. Then one day I had this strange dream where the both of us were being mugged while hanging out in Berkeley. So vivid, but knowing it was dream I wondered if I had a rough vision of something bad happening to her that same night. I couldn't shake the feeling and decided to drive down to work to see if she was okay. My concern for her flattered her enough to make out with me for hours at the next co-worker party. Afterwards we made tentative plans for another night and life was swell.

Two days later she stopped talking to me and quit. Quit!

This started my famous "I'm Fucked Week", short for I just got fucked over. I had no idea what was going through her head and wasn't getting any reasons from her or our mutual friends as to why she was avoiding me. I was bummed, but not broken hearted at all. I just could not believe that she had quit. Was I rock bottom?

"Hey Robert, how's it going?" --- "I'm fucked"
Walking past open doorways and offices saying "I'm fucked"
"What wrong with Robert?" I yell across the lobby, "I'm fucked"
"Can you hand me that box over there?" I would hand it to them, they'd thank me, and I say with no expression "I'm fucked."

It was quite amusing the lengths I took it. I think I was even signing off on papers with that phrase too. So this gets back to her of course and she was a little nervous when she came back in to get her final check a week later. I chatted her up for a bit like nothing had happen and she seemed relieved that I wasn't going to get all weird about it. Why would I? All we did was make out. Gees.

Just one crush story of many.