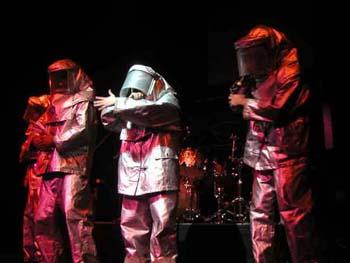 During the 8 Bit set I was laughing at Le Frost who was pretending to rub her crotch area (over her robot suit) in such an exaggerated (and amusing) manner. She saw me laughing and on her next verse she came over and tried to grab me. but with her thick gloves on it looked worse than it did.. Some of the crowd next to me thought it was quite amusing though. Wasn't trying to make it sound like girls fondle me all the time, that never happens of course. Oh the phrase "grabbing my nuts" is also a title to a 8 Bit song. I would normally refer to them as P + 5E + 3H.

My plans were to hit Kiss or Kill for Helicopter Helicopter, jump over to Glendale to catch Midway and then back to Kork for the Randies and Blockage at the very least. They fell apart on me when first I looked up and noticed it was already 9.20 and I lived 25 miles from Silverlake and later at the Scene when I noticed it was already after midnight and I missed the Randies and Blockage.

Went straight to the Scene to see Midway, with the Mormons and 8 bit also, making it there by 10 PM. They didn't start until 10.45 and I had to talk to my friend about some things which took a good 30 or 40 minutes, missing most of the Mormons in the process. With everything running late, Kork wasn't going to happen for me that night so I stuck around to see the Mormons, who seemed surprisingly sober and played a somewhat professional (for them) set.

I apologize to everyone I told I would be there, and more importantly I feel bad for missing the bands.

By now many of you have heard the rumors of the near brawl at the LA Weekly music awards between these two bands. The reason the fight started was completely fucked up and 8 Bit is to fault for that [as told from 2 sources]. Talking smack about the Randies hating KorK wasn't cool either, but some members of 8 Bit think saying shit is amusing. [Sometimes it is: The attacks on 8 Bit, the English wannabe DJ was brilliant]

Some bands like to go it alone, some need the community that KorK offers and some lay somewhere in the middle. 8 Bit loves being on the outside, and the Randies love KorK. Really just a difference of opinion.

Me, I like most bands even if the individuals are or become jerks. As long as the music is good I'll listen and see your shows, but it's hard not to let crap like this not affect my opinion of some groups.