It was after Midway’s label showcase at the Gig that I finished off the kettle one and OJ soda, arriving at Little Pedro’s Blue Bongo momentarily unaffected. The venue was small for a full blown Kiss or Kill but it was a last minute location change that ended up with the right vibe for the night. High marks for its long bar, cool couches, and easy parking, with the only downside being a finicky sound system. Heard that they will be setting up a rooftop patio in the near future, so I hope to see more events there when that happens.

Saw the Makeout Bandits, listened to Silver Needle from the bar, missed the Letter Openers, the OAOT’s and only caught half of the last Get Set Go song. A whole bunch of 2 dollar pbrs and my half pint vodka drink might have something to do with that. Maybe. In reality I was outside yapping to Serina and her new job, or watching Colin enjoy his 21st birthday: 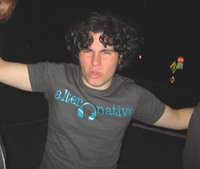 From Colin’s girlfriend:
-Colin trying to get me to kiss every girl I knew there.
-Colin frothy-mommying E and LR
-Colin telling every girl he met or already knew that she was "a looker."
-Colin asking for another whiskey and coke after all this.

Oh you can read this girl’s take on the night.
She loves Get Set Go and hates Joe’s band Pu$$ycow, so of course he put her review up as their about the band section on myspace.

She also went to the GSG show I missed Monday night.
Looks like she hates the Service Group too.

Corey was nice enough to let me crash on his couch after dropping Ashley at home. I remember boasting about two hugs and how hot that was (I’ve been over using the Paris Hilton phrase on purpose all month) and then worrying about JP hating me. Corey said she wouldn’t because it wasn’t considered nice to hate retards and then yelled t me to get my feet off the dashboard.

Corey, I drooled all over your couch, so there.