I love pizza, yes I do 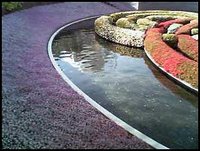 My Saturday highlight was a dinner at Denny's and a better than average SNL.

Sunday was too nice of a day to sit at home so I told Corey and Ashley that we were going to the Getty Center.

Picked up Ash in downtown then switched cars at Corey's to get some lunch. A hour later we decided on Panera Bread in Santa Monica. Perfect day for the patio eating watching the Coffee Bean guys scooting around on segways and listening to 17yr old girls talk smack about their friends and what car their friend was to receive on her birthday. It was my first time there so I ordered the Can't Go Wrong Italian Combo but wished I'd ordered a different half sandwich/salad instead. Don’t get me wrong, my sandwich was damn good, just not very adventurous. 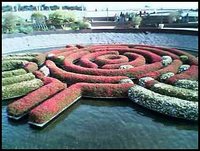 We finally made it up to the Getty, enjoying the gardens and city views more so than the galleries. Afterwards we decided to continue the night with booze, spinach pesto chicken pizza from Abbot Kinney and the last half of the Academy Awards at Corey's apartment. I ate way too much pizza of course and ended up spending more time online feeling like the fat myspace loser I am than watching the awards. The show was over by 8.30 and then we threw in the 40yr old virgin and I slowly died from over-eating.

I would eat it all again.
Yes I would.
right now.
bring it.