Los Abandoned are playing one more early show at the Echo on 7.25 to test out new material plus new arrangements on some of the favorites. The show on last Monday was downright amazing. 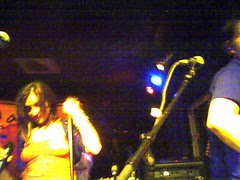 They always nearly lie down during "Los Angeles", in every show I've seen, but this time they were completely flat for a couple minutes with nearly 80 percent of the large audience lying/sitting on the floor of the Echo.

Yeah I didn't because that had to be the dirtiest floor ever, that and I was sort of sitting on the stage already. I looked back and saw my poor friend getting stared down by the little ones because she also remained solitarily upright in the middle of the floor.

I lost the picture of that scene sadly.