Bummed for a couple reasons 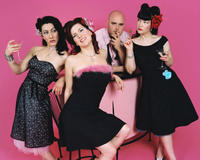 Megan and Kelly are leaving The Randies and Laura and Sienna will continue the band.

I know nothing as to the reasons behind any of this, but as they say, change is good. Wishing Megan and Kelly great success for whatever the future holds for them. While The Randies was a big part of their lives lately, in the end it is just a band, and by no means defines a person's place in life. A bummer still.

When I was shopping at Albertsons last night, I kept crossing paths of these two young girls in their early 20s who kept giggling. I didn't know what was up with them and continued my shopping adventure. The third time I heard them say, "oh he's OLD" and ran off laughing. Maybe they wanted to sell me something, but I didn't fit into the age group they were targeting.

It had to be the converse high tops that threw them off.

As much as I try to deny it, I'm old and I've been old for a long time sadly. Until last night I never considered 32 (33 next month) as old. Dementia will do that to you. I think it would. Who am I? Where's my pudding?