I love going to the dollar cinema, so instead of torturing you folks with another I have crush and a pic of DG is still my background image, blah blah blahness, I'm going to give you my take on the last two movies I saw on the cheap.

Reviews given without regard for insightfulness and with the assumption that you already seen these films. 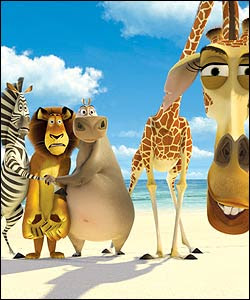 The lemurs were great especially King Julian as played by Sacha Baron Cohen (Da Ali G Show - he is Ali G) . Every one talked about the penguins, but they are so not funny. Guess the kids and retards like them.

Dreamworks animated films will never be on the same level or quality of an average Pixar film. They play more for the lowest common demoniator of the viewing public, releasing quanity over quality.

This doesn't hurt Madagascar because the movie hits enough jokes, sight gags, and movie references to keep feeling fresh. It's more topical than groundbreaking, keeping with old WB cartoons compare to Pixar's goal for timeless classic. Since Dreamworks was co-founded by Jeffery Katzenberg & not so nicely axed from Disney, there are the obvious Lion King jokes and at the end credits, the hippo mocks Tinkerbell.

Personally I felt that this movie had parts feeling inspired by the old Abbott and Costello movies and some Bob Hope's "road pictures" with Bing Crosby; strange wackiness, great secondary character roles, and the fish stuck out water plot. Cute and very amusing.

I give it four out of five Loranges

Star Wars - the last one

Dude, he got his legs chopped off!


Five Loranges just because of that alone.