November 08, 2005
My evening was spent tutoring one of the most eloquently speaking gang members I’ve ever met on the use of his new computer last night. I flaked on him Sunday night and decided it would get it out the way and not try seeing the Makeout Bandits in Glendale.

Reinstalled some drivers, cleaned up the spyware, and found myself a nice little hina to kick it with later.

During the spyware scan I came up behind her and said, “Hey, where you stay at?" not waiting for an answer I continued, "How ‘bout you stay with me tonight?” 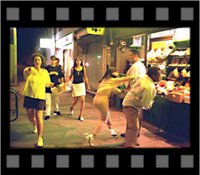 She smiled softly and told me she would be right back after she thought about it. I finished with the computer and bumped into her chatting with a small group of girlfriends.

I smile and scan their faces as she turns backs to them and says, "Yeah thats the dude."

All and all it was a good night and I found the beatdown very welcoming. In return for my services I received ten dollars, a soda, and someone I can call if I'm having a "problem" or need to teach someone a "lesson".

Yes, I'm doing "quotation marks” with my fingers as I type this.