Pissed that I overslept

My highlight of my weekend was to be trip out to Pasadena for the Doo Dah Parade.

Every year I miss it for one reason or another, grr.


The best thing about this parade is that for ten bucks you can be in it to do almost whatever wackiness you like showing off.

Over 1,500 participants in over 100 ‘marching groups will appear in Doo Dah’s 29th occasional event this fall. America’s favorite “other parade,” known for its colorful and irreverent satire is a spoof on the New Year’s Day Rose Parade. 45,000 typically attend the annual pre-Thanksgiving event, which was named by The Reader’s Digest as the Best Parade in 2004.

Last year had these groups: 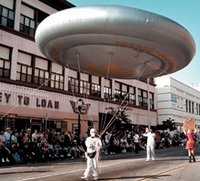