I love seeing movies on the cheap at the local dollar cinema. These reviews are given without regard for insightfulness and with the assumption that you already seen these films. So deal. 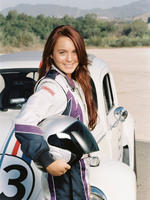 There is enough here not to bore you and seeing that little old VW bug does bring back some great memories. Once you’re past the sentimentality, this is basically a simple movie, slightly better than staring at a blank screen.

The focus remains on Lindsay and Herbie but the relationship isn’t built up enough with the unchallenging script which shorts the actors in this movie, especially wasting the talents of Michael Keaton and Matt Dillon.

This Herbie has lost his soul over the last 30 years, mostly do to the over use of CGI in the personality department. The old car groaned, honked, and okay, defied physics, but it never morphed the shape of it parts into expressions. Old Herbie was alive, had soul and personality within its original form factor and supernatural powers somehow installed into it. Now new Herbie blinks, headlights move around like eyeballs, and has the ability to reshape the bumper to smirk - it’s actually kind of creepy. 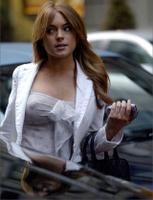 Lindsay Lohan is every teenager and dirty old man dream in this movie - the healthy, inner glow, pre-crackwhore Lindsay that we know today. I thought she cleaned up surprisingly well for this G rated movie.

Justin Long was forgettable and looked the same as the last time I saw him. Again, what a waste of Michael Keaton and Matt Dillon.

The worst offense this movie makes is promoting NASCAR like it was a legitimate sporting event on par with golf or something. needs to be castrated for re-electing Bush and making NASCAR popular.

I give it two Loranges